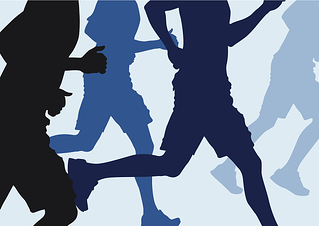 VO2 is the total amount of oxygen that your body consumes every minute.  It is expressed in mL of oxygen per minute. VO2 max is the maximum amount of oxygen that your body can consume per minute.  VO2 is measured by wearing a mask or mouthpiece to capture your breath.  The volume of air inhaled and exhaled is measured; the gasses in the air are then measured as a percentage. For example, if you are moving 30 L (30,000 mL) of air per minute and the incoming air is 21% oxygen and the exhaled air is 17% oxygen, your VO2 is 1200 mL per minute (21%-17% = 4%; 4% of 30,000 mL= 1200 mL).

The following is a breakdown of the two equations:

SV = Volume of blood pumped per beat in milliliters

Aoxy = Milliliters of dissolved oxygen per milliliter of arterial blood

Voxy = Milliliters of dissolved oxygen per milliliter of venous blood

Very often, VO2 is divided by an athlete’s weight in kilograms to aid in making comparisons in overall fitness levels between athletes.

There is a bit of controversy surrounding the “max” part of VO2 max. The concept of VO2 max was developed by AJ Hill in the 1920s. Hill thought that VO2 max was limited by the amount of oxygen that the cardio-respiratory system could deliver to the muscles. This thinking suggested that VO2 should increase linearly during a graded exercise test up to a certain intensity level and then plateau at higher intensities. The plateau would be the VO2 max.

However, there are some problems with this approach. First, athletes will reach a different plateau value if they are performing different types of exercise, like running, cycling, or rowing.  Second, not everyone reaches a plateau during the test. The root of the problem seems to be that Hill’s assumption on cardiorespiratory limitation is flawed.  (Check out my Central Governor Model post for more information on what is really limiting performance.)

Since the term VO2 max was already used to refer to this plateau, some people use the term VO2 peak instead when they talk about the highest VO2 that is achieved during a graded exercise test. In doing so, they seem to be trying to distinguish VO2 peak from Hill’s concept of VO2 max.

Most often, though, VO2 max and VO2 peak are used interchangeably to refer to the highest VO2 achieved during a certain type of all-out graded exercise test.

VO2 Max as a Measure of Fitness

VO2 max is widely regarded as a measure of an athlete’s endurance exercise capacity.  While this is true if you look at averages over populations, there are some very notable exceptions when you look at individuals.

A famous exception was when Lance Armstrong ran the New York Marathon.  He had one of the highest VO2 max values ever measured at 83 mL/min/kg but still ended up finishing nearly an hour behind the winner and 867 other runners with lower VO2 max values.

If an individual athlete increases their VO2 max through training, this can be an indication of an improvement in fitness. This provides an advantage over measuring maximum heart rate, which might not change with training.

Just like Maximum Heart Rate, it’s easy to find training intensity zone charts that are based on a percentage of VO2 max.  Here are a few examples:

Unfortunately, it is not generally feasible to use a metabolic cart to measure VO2 to guide every workout; as such, the percentage of VO2 max needs to be correlated with some other parameter such as Heart Rate or Power that is practical to measure during each workout.  For example, if a trainer wanted to prescribe a workout at 70% of VO2 max, they could look back at the data from the VO2 max test and see what the Heart Rate was at 70% of VO2 max and prescribe that Heart Rate for the athlete.

The next method I will examine, Lactate Threshold, is an attempt to measure the physiology at the intensity level endurance athletes typically perform at. This is the topic of my next post.