It’s important to be clear on the topic here.  Many Training Intensity Zones use heart rate as the main feedback metric for the athlete to adjust intensity while they work out.  The method discussed in this post uses the concept of Maximum Heart Rate to determine the heart rate zones for each athlete.

The heart has a maximum beating rate which typically decreases with age.  The reasons for the decrease with age aren’t entirely known, but it is not preventable simply by training more.

The idea of using maximum heart rate to set training intensity zones demonstrates an attempt to execute a more precise implementation of the Borg Rating of Perceived Exertion concept.  Instead of estimating where your intensity lies in the range between resting and maximum exercise, you calculate where your heart rate lies within that same range.

To make the system work, we need two things:

When it comes to establishing your Maximum Heart Rate, there are two choices. You can estimate it from a formula, or you can measure it.

If you read anything about Maximum Heart Rate, you will quickly run across the formula of:

You may see this formula on a treadmill or stair climber machine at a gym that has a heart rate measuring device built into the handle grips. If the machine contains a table of heart rate zones that vary with age, it’s probably based on this formula or one like it, even if it isn’t written out.

It’s fascinating that the equation is so ubiquitous and yet many people regard it as incorrect. It appears to have two major flaws.  First, it isn’t very accurate. The equation tends to overestimate maximum heart rate for young people and underestimate it for older people. The slope of -1 beat per minute per year of age is a little too steep. There are many other equations that are more accurate (like 208 – 0.7*age).  It seems like 220 – Age has stuck around for so long simply because it’s easy to remember and calculate in your head.

The second problem with using a formula like this can’t be solved by using a more accurate equation.  The equations can do a good job of estimating maximum heart rate for the average of a population.  However, any individual could have their maximum heart rate be 10-20 beats per minute or more different from the value predicted by the formula.

I haven’t seen any data that compares the uncertainty associated with the subjectivity of an RPE method like the Talk Test with the uncertainty associated with using a HRmax value from a formula.  It would be interesting to see if the subjectivity of RPE was better or worse than the error caused by using a population-average formula on individuals.

A more individualized way of determining the maximum heart rate is to run a test to measure it.  The problem with such tests is that they require a highly motivated athlete, and they can be dangerous.  The test typically requires some type of all-out effort for about 10 minutes.  If the test is too long, the body may fatigue before reaching maximum heart rate.  If the test is too short, the maximum might not be reached either.  I found some studies that indicated a properly run maximum heart rate test could be repeatable within +/- 1 beat per minute. That’s significantly better than the formula methods.

Once you have the Maximum Heart Rate, determining the training intensity zones is simply a matter of taking certain percentages of the maximum; charts abound on the internet for setting zones based on the maximum.

Here are some examples of Heart Rate Zone Charts: 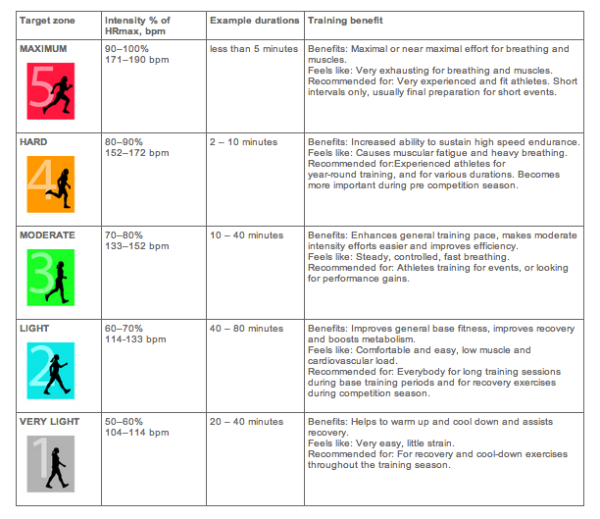 There are some significant benefits to this system.  Heart Rate monitors are inexpensive, easy to use and generally very accurate. The Maximum Heart Rate test can be performed with the same equipment that you use when you are training.

An apparent shortcoming of this method is that, even if the Maximum Heart Rate is measured accurately, all of the training zones are still based on a formula with only a single number as an input.  Moreover, even if you use the more sophisticated methods that include resting heart rate, all of the zones are set based on the extreme ends of the performance curve. Very little training is actually done at rest or at maximum heart rate, but those are conditions used to set the optimal training intensity zones.

The next post in this series will take a look at a similar but more sophisticated method called the VO2 Max Test.