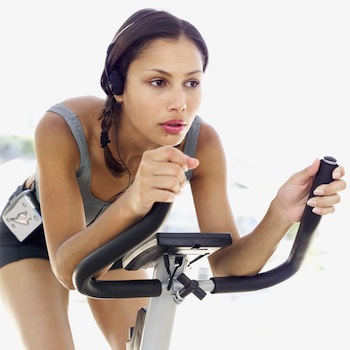 The Wingate Test, or Wingate Anaerobic Test (WANT), is one of the most popular measures for determining anaerobic power and capacity. It is considered to be an accurate indicator, as the values have been compared to sports performance, sports specialty, and laboratory research.

What is Anaerobic Power?

Adenosine triphosphate (ATP) is created and stored in muscle cells and quickly used up during exercise. The body uses phosphocreatine (PCr) to re-synthesize stores of ATP. Anaerobic power is the representation of how ATP-PCr energy pathways are able to produce energy, explains University of New England. Anaerobic power supplies athletes with the short bursts of energy so often necessary in competition.

How Does the Wingate Test Work?

Typically, the Wingate Test is conducted on a mechanically braked bicycle ergometer where revolutions of the flywheel are recorded in five-second intervals. An athlete pedals for 30 seconds at a pace defined as "all out," describes Sport Fitness Adviser. Before the test, the athlete is advised to carry out a three-to-five minute warm up, and later to recover using a one to two minute cool down. At the very start of the test, there is no resistance, but a set amount is applied to the flywheel within the first three seconds.

The Wingate Test can alternatively be performed on an arm crank ergometer by bicycling for a predetermined time at maximum speed against a constant force. The Wingate approach has inspired similar tests to measure anaerobic power and capacity through running instead of bicycling, for example, Sprint Interval Testing.

What Does the Wingate Test Measure?

This is a measure of the highest mechanical power generated during any three-to-five-second interval of the test, ideally recorded in the first five seconds, explains Sport Fitness Adviser. To calculate the value, expressed in watts (W), the following equation is used:

Force (amount of resistance added to the flywheel in kilograms) x total distance (number of revolutions x distance per revolution) / time in minutes.

The total amount of work completed during the 30-second test is expressed in kilo-gram joules (1 kg-m = 9.804 J). It is calculated by adding each five-second peak power output intervals.

This percentage expresses the decline compared to peak power output. It is calculated using the following equation:

Given its accuracy and data feedback on four critical metrics of anaerobic capacity and power, the Wingate Test is widely used by triathletes, cyclists, and other high-performance athletes to guide training.