Introduction. In the last blog post I outlined how Moxy was used over the course of five weeks to inform an athletes training. More specifically, the athlete, a well-trained cyclist, completed five consecutive weeks of 5-10 reps of 30-40s at ~600w (30-60s rest). The athlete tracked power output, heart rate, and SmO2. They allowed SmO2 to recover to at least 60% before starting the next interval. While its been suggested that Moxy could be a good tool to help autoregulate workouts there haven’t been too many case studies relating to how Moxy values change over time. In this post, I want to walk-through how SmO2 and power trends changed over the course of five weeks of concerted training. Before diving into the details I want to acknowledge that five weeks may not be adequate time to truly monitor chronic adaptations to exercise in trained athletes, more than likely, what these training sessions will help us understand is how things, like acute training load and stress can affect the outcome of a work.

Overall trends. One of the major benefits to using Moxy in combination with heart rate and power output, is that you can get a very individual look at how the body is responding to each workout that is completed. The first thing that will be looked at, before diving into specific trends in each workout, are the overall trends that occur during each workout. Throughout each workout it appears that SmO2 dropped continuously, albeit the drop for most workouts was only ~5%. Recovery SmO2 reached ~60-65%. Heart rate, when rest was kept consistent, continued to rise during the intervals to ~160-170. During rest, recovery heart rate tended to rise too, ~120-130. Throughout the training, power output rose from ~600w to about 660w during the last workout.

Workout 1. There appears to be an ~10% increase in SmO2 recovery after the first interval, this occurs without a significant change in heart rate which indicates that some vasodilation to get more oxygenated blood to the working muscle was occurring. One thing that could be done to prep the muscles better for the upcoming workout would be to warm-up more sufficiently before beginning. More on that later. In this example, recovery SmO2 and heart rates stay fairly consistent after the first interval, ~40% and ~120-130, respectively. There is a slight decrease in SmO2, down to ~38% at the end of the workout, most likely due to slightly increased power output at the end of the workout. 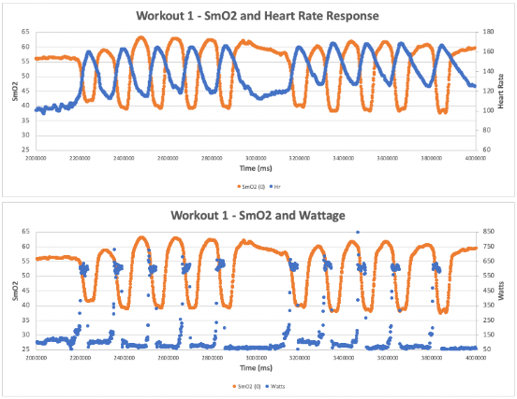 Workout 2. One difference from this workout to the first is a change in rest period after the first 5 intervals. The first 5 intervals show a pattern of slight decrease in performance SmO2, from 36 to 34, with a slight bump in heart rate, but more specifically, a large rise in recovery heart rate from ~120 to ~140. After the fifth interval the athlete doubled or tripled rest, which allowed working and recovery heart rates to stay lower ~160 and ~120, respectively. While heart rate stays consistent, there is a continuous decrease in SmO2 during working intervals, even though power output is staying the same. This could be due to a decrease in recovery SmO2 from 60 to 55, leading to higher desaturation levels ~35 to 30%. 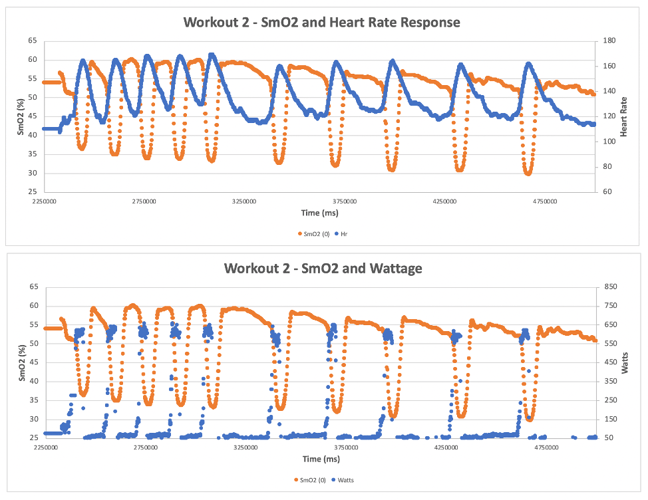 Workout 3. This workout was similar to workout 2. 5 intervals were completed, then 5 more intervals with slightly longer rest. Again, we see the same trends, as in workout 2 the first 5 intervals show a pattern of slight decrease in performance SmO2, from 35 to 32, with a slight bump in heart rate, but a large rise in recovery heart rate from ~110 to ~130. After the fifth interval the athlete increased rest, but this time recovery heart rate stayed elevated, while working heart rate stayed similar. This workout, led to the largest decrease in SmO2 during working intervals, down to ~28% during the second to last interval. This could be due to a decrease in recovery SmO2 from 60 to 55, leading to higher desaturation levels ~35 to 28%. This indicates a failure to reoxygenate the area during recovery, which could lead to a lower oxygen environment, thereby facilitating a higher unloading of oxygen during the working intervals.

Workout 4. This workout is a great example of listening to your body and knowing when to call a workout. The athlete reported that they were feeling a bit tired going into the workout, and it’s clearly evident that physiologically something was amiss as SmO2 only dropped to ~50% even though power output, and heart rate were similar to previous workouts.  Of course this could be due to a change in where the Moxy sensor was placed, but typically, differences of up to 10% are acceptable as variance within different sensor readings. Therefore, a difference of ~20% is over that limit and an indication that the muscle is not able to desaturate properly to facilitate this workout. The athlete even tried to extend the rest in an attempt to salvage the workout, but to no avail. 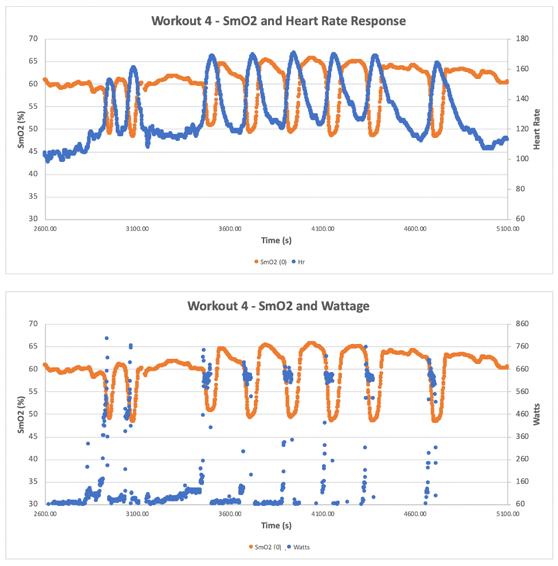 Workout 5. This workout was similar to workouts 2 and 3 but it appears that after the longer rest between intervals 5 and 6 the athlete used the same, shorter, recoveries as they did with the first 5 intervals. While the recovery times were shorter, recovery SmO2 stayed consistent ~60%, and working SmO2 decreased from 35 to 30%, while working power output rose from 600 to 660 watts. Heart rate steadily rose from 160 to 170 throughout the workout, and recovery heart rate rose from 110 to 130. This last workout is a great example of the improvement that can be seen after progressive overload, with subsequent rest. The athlete was working at higher power outputs, with the same if not lower amount of muscle oxygen extraction. Calling workout 4 early could have allowed for the athlete to recover more, leading to the increase in power output seen in workout 5. 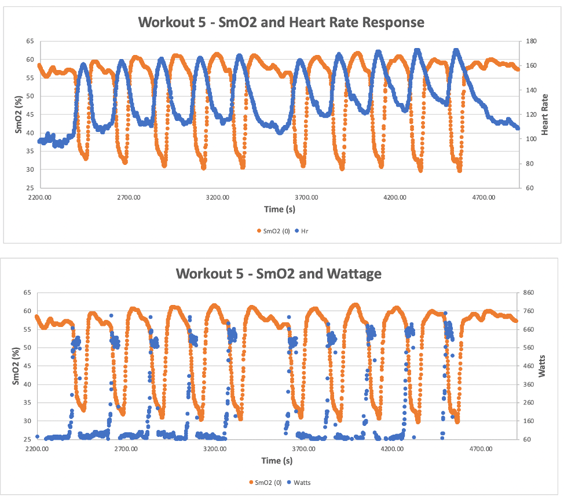 Summary. This post should be used as a case study to see how workouts can vary over the course of 5 weeks, and what sort of situations may arise necessitating cutting a workout short to facilitate more rest. Over course, this athlete was not only doing one hard workout per week but many different styles of workouts so drawing any causal conclusions is challenging but for coaches, this is a good demonstration of how doing the same workout consistently can inform an athletes training. In the next post, I will give some more practical advice regarding these workouts.