Moxy and Climbing: Breaking Down the Data

I thought I would add another area of possible application for Moxy Monitor: Climbing.

The graph below shows my SmO2 profile during the three different climbs I performed. The legend at the right  of the graph shows when each climb was done and the breaks in between.

The MOXY was placed on the right forearm, anterior side- flexor carpi ulnaris, I would say.

During the two breaks between the climbs, I was belaying my partner and picking routes to climb, looking at routes and so on. As you can see from the data, during the breaks there is still a lot of activity, as my forearms are always working. 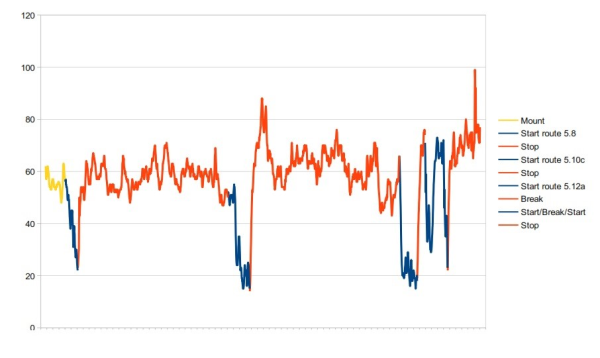 Then there is one section in red identified as a break during the third climb. This is where I was actually still hanging on the wall taking a longer break in a tricky part of the route. Then I made another attempt, followed by one more break, before I finally got to the finish.

Prior to the mount I did not do any warming up per se. I just started with an easier climb and went up gradually in difficulty. After the climbs you could see some supercompensation in SmO2. The part that I find interesting is during the more difficult climb, where I was working hard after the two breaks in the wall, I was unable to desaturate down to the prior low levels. This inability to do so may be some indication of muscular fatigue, and a possible indicator of how long a training session should last. In other words, as soon as you can no longer desaturate down to an identified low, the training is over.

I think a very good way to use MOXY in climbing and potentially other sports, especially strength orientated, is to maximize efficiency. Climbing and many other sports are not about a one rep max, but rather about conservation and efficiency. In the case of climbing, the use of MOXY could perhaps help provide guidance to more efficient climbing techniques through the use of an objective measure (SmO2).