The Effect of Mitochondrial Density on Athletic Performance 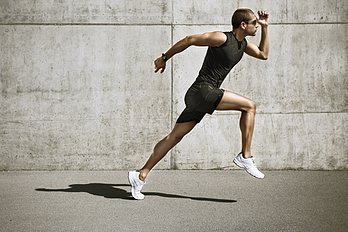 Mitochondria are the power source of your cells. Their task is to convert nutrients you consume into energy by manufacturing adenosine triphosphate (ATP), a coenzyme that is used by your cells for a range of functions from breathing to exercising. When you increase the size and number of your mitochondria, through mitochondrial biogenesis, the mitochondria can more efficiently convert energy into ATP, meaning more energy is available to working muscles. In other words, a greater mitochondrial density will allow you to train or compete faster and longer.

Mitochondria use oxygen to produce high levels of ATP through the breakdown of carbohydrates and fat during aerobic exercise. Exercise scientists thought for many years that the only way to increase mitochondrial density was through chronic endurance and strength training. However, in more recent times, multiple studies have been looking at how high intensity interval training (HIIT) can induce mitochondrial biogenesis.

One such study, conducted by MacDougall et al. in 1998, was carried out on healthy male undergraduate students. For three days a week, the subjects carried out four to 10 maximal cycling sprints lasting 30 seconds with four-minute recovery intervals between each. After seven weeks, levels of the oxidative enzymes succinate dehydrogenase in the skeletal muscle had increased by 65 percent, citrate synthase by 36 percent, and malate dehydrogenase by 29 percent. Higher levels of these mitochondrial enzymes led to improved skeletal muscle metabolic function.

Another study was carried out by Burgomaster et al. in 2008. Over six weeks, participants either partook in a HIIT program for three days a week or a steady state cycling program for five days a week. In the HIIT program, participants completed six 30-second sprints interspersed with 4.5-second minute recoveries, while the steady state cyclists rode for 40 to 60 minutes at 65 percent their VO2 max. At the end of the six weeks, similar increases in levels of oxidative enzymes — the proteins in mitochondria that speed up biological reactions in order to free ATP — were found in both groups of participants.

You may draw the conclusion from the above study that steady state training is equally able to improve mitochondrial density and biogenesis as HIIT, albeit more time spent exercising is needed. While this is possible, as Triathlete explains, if you are a moderately fit or above average triathlete with a VO2 max in the high 50s or above, you have most likely reached a point where training volume alone will have no effect on your mitochondria.

There are three basic rules you must always follow during HIIT to ensure that your workouts are effectively increasing mitochondrial density while avoiding injury:

Exercise is not the only way you can increase your mitochondrial density; you can also make improvements through your diet, advises Coach Calorie. Branched-chain amino acids (BCAAs) are three of the nine essential amino acids that are required by humans and, as they cannot be synthesized in the body, they must be supplied by diet. Amino acids are the building blocks of protein, and around .8 to 1 gram of protein per pound of lean body weight is typically sufficient to stimulate mitochondrial biogenesis.