In the last few blog posts I identified a significant right left quad oxygenation imbalance during both cycling and stair climbing. In order to legitimately test the extent of these imbalances, I recently completed a standard 4-1-4 assessment using my stationary cycling power meter. Briefly, a 4-1-4 assessment consists of one load (i.e. 200W) of 4 minutes on/1 minute off/4 minutes on, then the load is increased. This pattern is repeated until the athlete cannot finish one of the 4 minute sub-stages.

Set-up and Determination of Loads

Gear: Heart Rate Monitor on Chest and Moxy on Right and Left VL

Note: the complete rest between each stage is a VERY important part of the assessment, since each stage has two rest periods, I alternated right or left foot high to see if there were any differences in resting values based on the position of my foot.

Overall, I was able to complete Stages 1-4, I started stage 5 but only lasted ~60s before I had to stop. The SmO2, tHb and HR response results are shown in figures 1, 2, and 3 below. Figure 1 shows a typical SmO2 and tHb response of the right v. lateralis, immediately upon load being introduced, SmO2 drops, and tHb drops indicating a compression response of the blood vessels, thereby decreasing blood volume. Because this load is fairly low, oxygen delivery outpaces usage therefore there is an increase in SmO2 during the first stage as heart rate increases, indicated in figure 2. As the workout continues, SmO2 stays steady, then begins to decline during the 335- and- 403W steps. This indicates that my mitochondria are able to continue to extract oxygen from the blood even at high intensities. tHb continues to show a compression response until the last step of the third stage, where tHb falls then begins to rise, indicating a venous occlusion, where blood is no longer escaping the tissue. Finally, during the final two stages, tHb falls then has a continuous rise, indicating vasodilation in the tissue, shown in figure 3 which is most likely due to a build-up of CO2. This is indicative of a pulmonary limitation, meaning that my pulmonary system is not strong enough to effectively buffer CO2, causing vasodilation and increases in blood volume under the sensor. 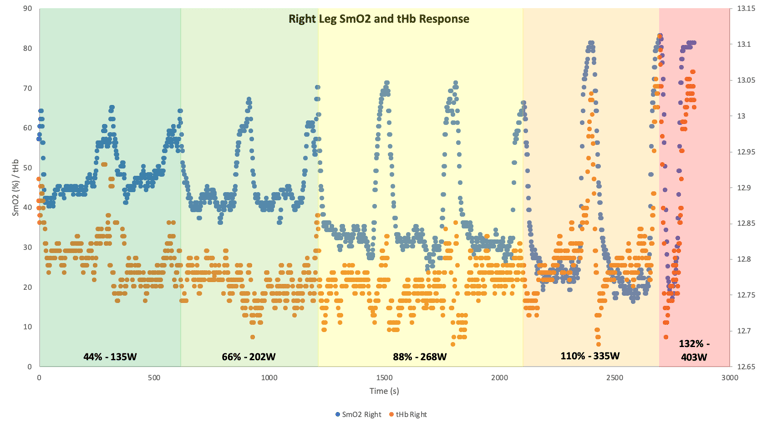 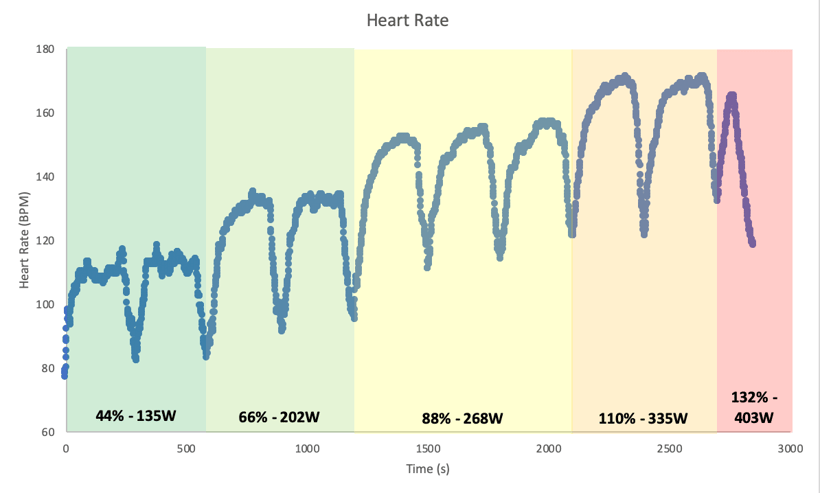 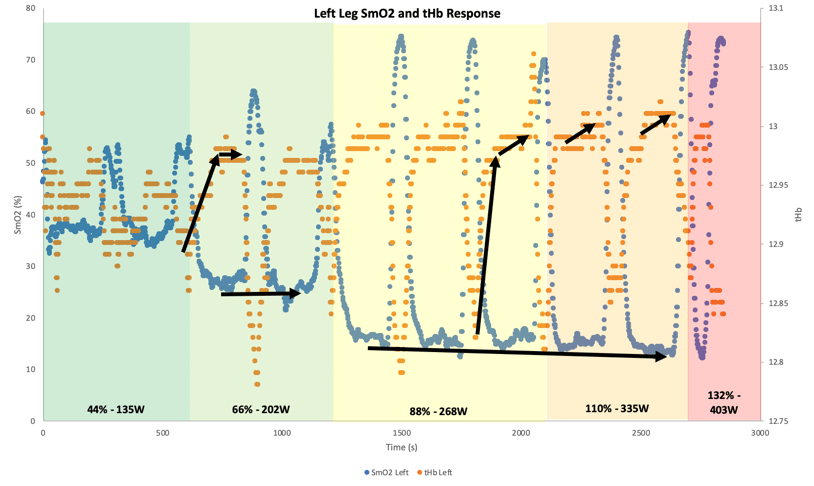 Next, I want to look at my left leg, but before that I want to point out that after a body composition assessment, I found that my left leg has half a pound less lean mass than my right leg, as shown below. This could be a major indicator of potential right left differences.

Figure 5 shows the SmO2 and tHb response of the left v. lateralis, immediately upon load being introduced, SmO2 drops, because this load is fairly low, oxygen delivery outpaces usage therefore there is an increase in SmO2 during the first stage. As the workout continues, SmO2 stays steady, and starts to reach its minimum values around stage 3 which are held for both the 335- and- 403W steps. Interestingly, immediately upon loading tHb rises the levels out for the remainder of the stage, even at the very beginning. This is an indication that there is almost an immediate arterial occlusion, meaning that the muscle is contracting hard enough to occlude flow. The way that the left legs compensates is by extracting high amounts of oxygen early on in the workout.  During the final two stages, tHb rises then continues to rise, indicating vasodilation in the tissue, shown in figure 6 which is most likely due to a build-up of CO2. Again, this is indicative of a pulmonary limitation, meaning that my pulmonary system is not strong enough to effectively buffer CO2, causing vasodilation and increases in blood volume under the sensor. But the major thing that was discovered by using a Moxy on both legs is that the oxygenation patterns of both legs are GREATLY different. Perhaps, the left leg, since it is weaker, has to contract harder to keep up with the right leg, this leads to an almost immediate arterial occlusion. 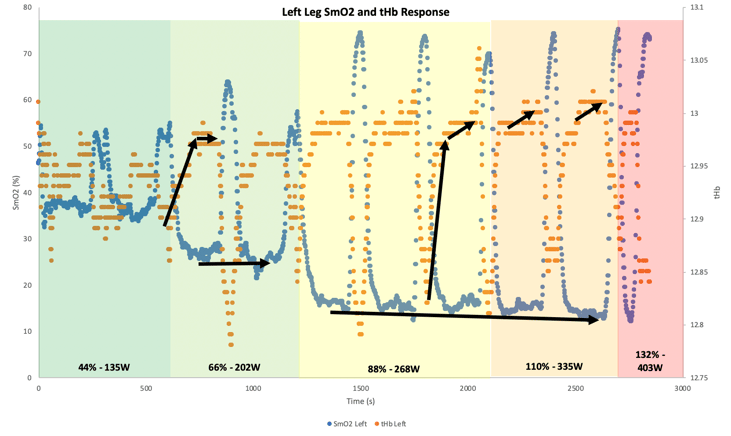 Finally, I thought it important to compare the SmO2 curves side by side, or in the case superimposed onto each other. And what we see is that the left leg has a 15% lower SmO2 until the last two stages where SmO2 in both legs becomes about even. The recovery kinetics are fairly similar leading me to speculate that these differences are arising because of strength differences.

In summary, over the last few weeks, using a Moxy on each thigh, I identified a potential right left oxygenation imbalance. To test if this imbalance was persistent across sports, I tested both cycling and stair climbing and confirmed that indeed, it did exist. Finally, I completed a 4-1-4 assessment and identified that the left leg is weaker than the right leg causing an arterial occlusion almost immediately even at low workloads. In order to rectify this, I will need to take some time to equal out the strength of each leg by doing this, the leg won’t have to contract as hard at the same given workload thereby reducing the incidence of arterial occlusion which could lead to the prevalence of more injuries if left untreated.