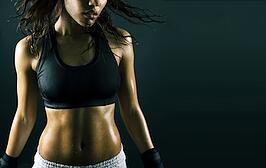 In the last blog post, we explored the benefits of strength training as well as outlining how to implement strength training for endurance athletes. In this post I want to provide a personal case study, as to how I am currently using my Moxy Monitor to dictate an endurance/hypertrophy-based weight lifting session. The first weight training session was completed on Dec. 24th, and consisted of 4 sets of 15-20 reps of lunges, renegade rows, Body weight squats, and weighted lunges with 30-90s rest. You can find the heart rate details on TrainingPeaks - here. The goal of the workout was to push SmO2, (with the Moxy on the right v.lateralis) as low as possible within the 15-20reps then recover, until SmO2 reached a peak and started to come back down.

The first step was to determine the Recovery Baseline, after a ten-minute warm-up, consisting of dynamic drills, foam rolling, and mobility, shown in figure 1, which is the absolute lowest SmO2 to recover back to after each set and was ~55%.

Figure 1: Baseline Recovery after a warm-up was determined to be ~55%

Since an oxygenation value of 55% is fairly normal in resting tissue, this indicates that my muscle could have been warmed up further, through low intensity cycling or cardio.

After the warm-up I started 4 sets of 15-20 Lunge Matrix exercises on each leg, shown in figure 2, it’s evident that from the 2nd to 3rd set of lunges, blood delivery started to increase, shown as an increase in THb, and the arterioles began to vasodilate, thereby allowing for SmO2 to increase well above 55% during the rest period of the 3rd set. It should be noted, that the rest periods took longer on each subsequent set but were still within my allotted 30-90s window. Finally, the performance baseline, shown in red, decreased from the 1st to 2nd set, and again from the 3rd to 4th set.

The second exercise performed were Renegade Rows. Since renegade rows are a core, and upper body exercise, and I was not monitoring SmO2 in these muscles there isn’t much to glean from this portion of the workout. However, if I were to monitor SmO2 during this exercise, it’s recommended to place the Moxy on the pectoralis major, or the triceps brachii.

The next major set that was monitored were, body weight squats, shown in figure 3, below. 4 sets of 20 were completed with rest periods ranging from 71-114s. It took progressively longer to recover, the peak recovery SmO2 values were declining, and performance SmO2 was flatlining if not increasing, indicating an inability to both de/reoxygenate. The longer rest after set three, allowed the performance SmO2 to reach previous values. Also, my legs were feeling pretty tired at this point. After set four, in combination with the longer rest during set three, baseline SmO2 returned back to 75%, which indicates that the extra rest was needed and helped to push the last two sets of weighted lunges.

The final exercise that was completed were weighted lunges, I completed 2 sets with rest periods of 114s and 100s, respectively. The longer rest was essential to continued performance, as shown in figure 4, recovery values reach 73% and 80%, and performance values reach 20% and 12%. Pushing through the last SmO2 plateau to drive SmO2 down to 12% was all I could handle, so I called the workout after two sets. SmO2 recovers to 80% then slowly declines as I cool-down.

Moxy monitor is not just useful for endurance events but is useful for strength workouts, and can be used to dictate sets, reps, and rest periods during different exercises. This blog post illustrates, the usefulness of Moxy which provides the ability to monitor, in real-time, the skeletal muscles’ capacity to de/reoxygenate during a strength-endurance workout.