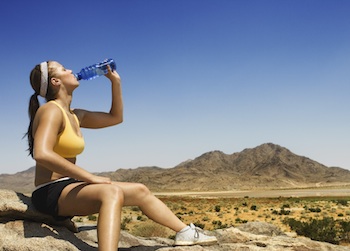 The main purpose of high altitude training is to stimulate the production of red blood cells in order to increase the efficiency of transporting oxygen to the muscles. An increase in red blood cells prevents muscle fatigue in endurance sports and helps to improve a triathlete's performance in competitions. However, the initial hypoxia resulting from exercising in a thinner air environment causes temporary muscle fatigue, which in turn can hinder training and cancel out the positive effects of high altitude workouts.

There are three main altitude-exposure techniques that are utilized to delay muscle fatigue and improve endurance performance. These are Live High-Train Low, Live High-Train High and Live Low-Train High. All are intended to expose triathletes to the benefits of high altitude training while avoiding muscle fatigue and other unwanted results that might prevent them from reaching their fullest potential.

Typically, High altitude is considered to be around 6,500 to 8,000 feet, while Low altitude can be anywhere from sea level to up about 4,000 feet, states Altitude.org. The differences between high and low altitudes are significant enough to have a noticeable effect on training.

The Live Low-Train High method involves exercising in low oxygen conditions but resting and recovering in a normal atmosphere. Although some studies suggest that this may work, there is little evidence to support the theory that competitive performance is improved at sea level.

As all the training in this method is conducted at a high altitude, workouts are less intense than they could be at sea level. Because of this, it has been suggested that triathletes may even see a decrease in their overall fitness levels, according to Altitude.org.

Living and training at high altitudes provides triathletes with maximum exposure; however, there remains a sense of controversy as to whether competitors experience positive effects on return to sea level. The main problem with the Live High-Train High method is that triathletes are more susceptible to the negative effects of altitude. In fact, the method receives the least support from experts in regard to building up resistance to muscle fatigue.

Without a doubt, the Live High-Train Low method is the most popular of the three techniques. Triathletes are able to acclimatize to high altitudes by spending the majority of their time in a low-oxygen environment, while workouts are carried out at altitudes closer to sea level. This allows triathletes to avoid the negative effects of altitude that lead to difficulties training while still receiving the benefits, such as building up a red blood cell count and warding off muscle fatigue for longer durations.

For the Live High-Train Low method to be effective, triathletes must spend at least 12 hours per day for a minimum of three weeks at a high altitude, explains Altitude.org. Athletes who have spent at least this much time have shown performance improvements in events lasting from 8 to 20 minutes, no matter their prior level of fitness.

The Live High-Train High and Live High-Train Low methods were tested in a study by Stray-Gundersen and Levine in 1997. College runners were split into three groups in order to test the effects of the two different techniques in comparison to living and training low.

Triathletes interested in delaying muscle fatigue to improve endurance performance may want to experiment with these three high-altitude training techniques.