The discovery of lactic acid occurred in 1780 when Swedish Chemist, Carl Wilhelm Sheele was able to purify lactic acid from sour milk. Much scrutiny was placed upon his experimental conditions, but in 1810 his findings were verified when scientists discovered lactic acid in purified organic tissues such as milk, ox meat, and blood. However, it wasn’t until the 1920’s that lactic acid was researched in association with fatigue. Archibald Vivian Hill and Otto Meyerhoff, two pioneers of exercise physiology, showed that lactate (thought to be lactic acid) was created during times of high intensity exercise. This was generally accepted, and when Margaria et al. 1933 showed a relationship between lactic acid in the blood and hydrogen ion (H+) content during exercise. Thus, cementing the thought that lactic acid CAUSES fatigue.

Construct - an unproven, nonfactual interpretation that has mistakenly been accepted as fact.

This cause-effect relationship has been well accepted, and perpetuated in the physiology literature (For review see Robergs et al. 2004). While it cannot be argued that lactate is produced by the skeletal muscle as a secondary product of glycolysis during high intensity exercise, the causal nature of lactic acid to fatigue is unfounded. Here’s why: 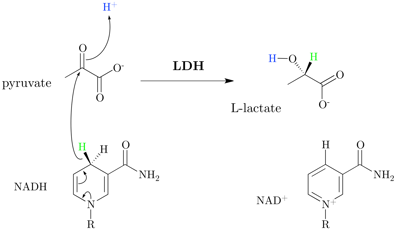 Image by Jazzlw on Wikipedia

The Cause of Fatigue

Historically, lactic acid has been thought to cause fatigue because of its association with metabolic acidosis during maximal exercise tests. While fatigue is a complicated multifaceted topic, it is clear that lactic acid is NOT CAUSING FATIGUE. In fact, lactic acid does not exist in cell simply because pH does not drop low enough for the H+ ion to dissociate from the lactate molecule AND lactate actually helps glycolysis to continue by buffering 2 H+ and maintaining redox balance (NAD+). The question is: if H+ ions aren’t coming from lactate, where are they coming from and are, they the culprits that cause fatigue? Again, there are many places in the bioenergetic pathway where H+ is coming from, but it is thought that the majority of H+ is coming from the breakdown of ATP at the actin-myosin binding site. This breakdown also results in the creation of an inorganic phosphate molecule Pi, both of which are shuttled into the mitochondria and can be used as substrates for oxidative phosphorylation. While H+ and Pi have been associated with fatigue, recently, it has been proposed that H+ isn’t the cause of fatigue, in fact, compelling arguments for the causal role of Pi has been made. The idea being that Pi concentrations increase during high intensity exercise because of a greater breakdown of creatine phosphate and fewer cross bridges can form, thus reducing force output. While the exact mechanisms that govern fatigue have not been fully elucidated, again, research indicates that lactate its cause.

While it’s tempting to simplify fatigue by continuing to blame it on lactate, lactate is actually a powerful molecule that allows us to continue exercising when the mitochondria/TCA cycle can’t keep up with ATP production, at high intensities. And it falls on scientists and coaches to disseminate proper information so our students and athletes can more effectively train. My challenge to you is to start by simply not allowing the continued perpetuation of this lactic acid construct.